This game has nice and fresh touch on an old Wild West shooter with a first-person view.

Sky Noon is a highly addictive FPS made in a cartoonish Wild West style by developers from Lunar Rooster. The story goes as follows: people were forced to inhabit floating islands to escape from drought. These frontiers turned into a showdown for the cartel and hired gunslingers. Your playable character represents one of those parties and your ultimate goal is to throw away enemies out of the floating map by a compressed-air weapon of choice. Yes, there are no bullets in this first-person shooter. Your character can utilize abilities to be able to handle mines, dynamite, teleporter, jet boots, and booster. If the first three of those are pretty self-explanatory, boots and booster need a closer inspection. When you activate jet boots, you can recover from being knocked. Booster launches you forward and blasts air upon collision with the surface or an opponent, but its downside is a relatively low recharge progression. Lasso is another staple in your equipment. It restrains the enemy and sends it the way you direct it. These are all fun but guns are funnier to use. Paired with a grappling hook that will save you on more than one occasion sending you back to the ground, the guns can be customized to suit your individuality. Options for steam-powered weaponry have nothing extra: revolver, machine pistol, hand cannon, and shotgun. Each of these has its peculiarities and it's best to try them out one by one to decide which one is yours. Since the game leans toward online multiplayer, there are a standard set of modes such as Free For All, Team Deathmatch, and King of the Hill. The Cart, Icy Peaks (designed for duels), and Money Bags modes are somewhat unique for this game and vary the gameplay greatly. But here's the thing: unfortunately a player base isn't active at the moment. Until this situation changes, you can jump through Sky Noon in single player competing for the top trial times or invite your friends over and have fun together. 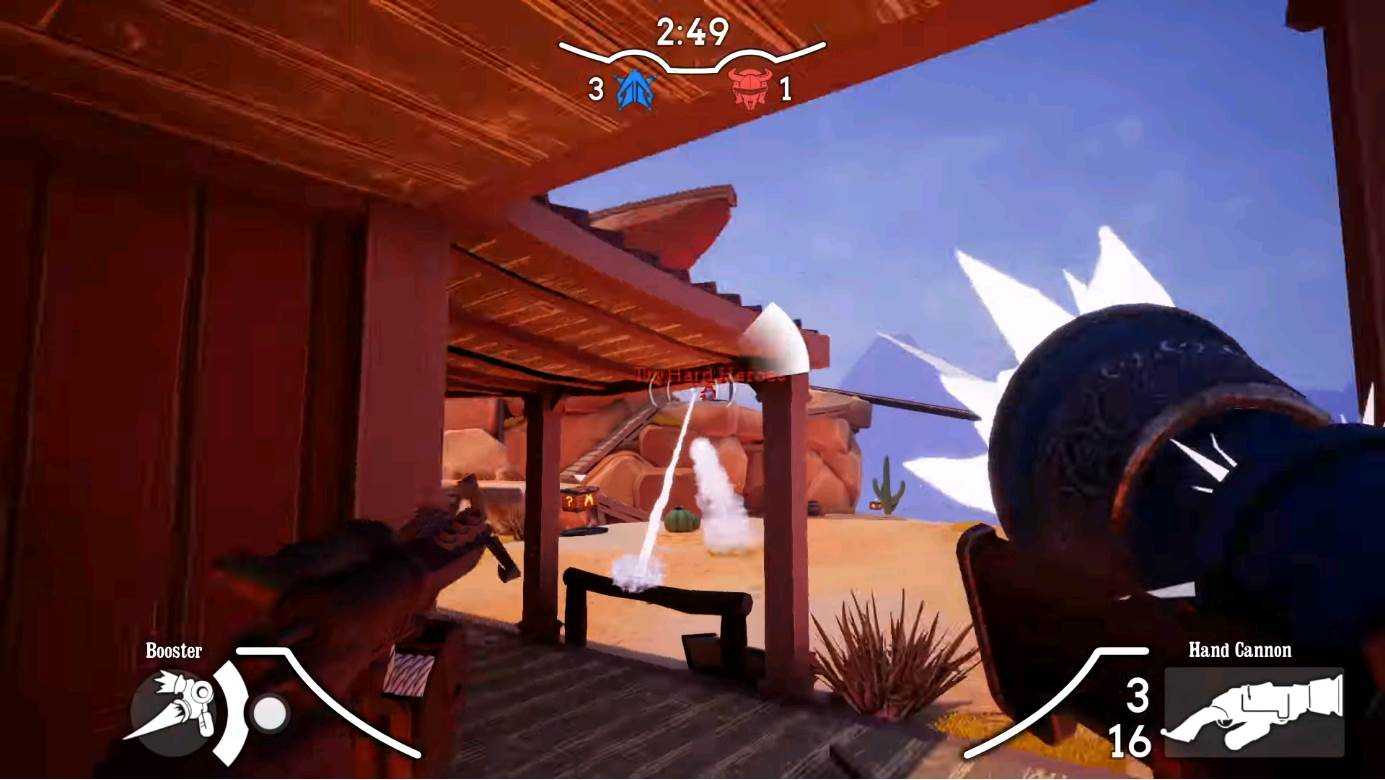 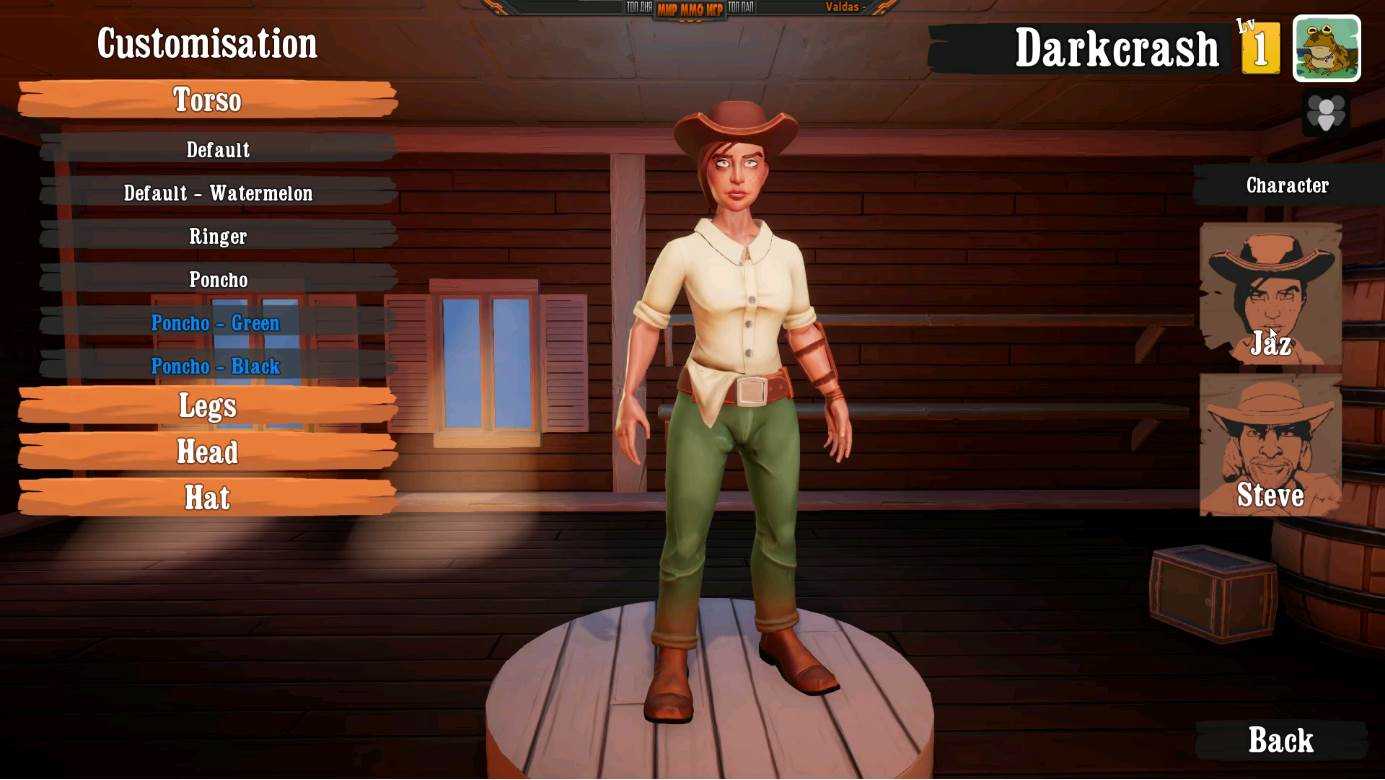 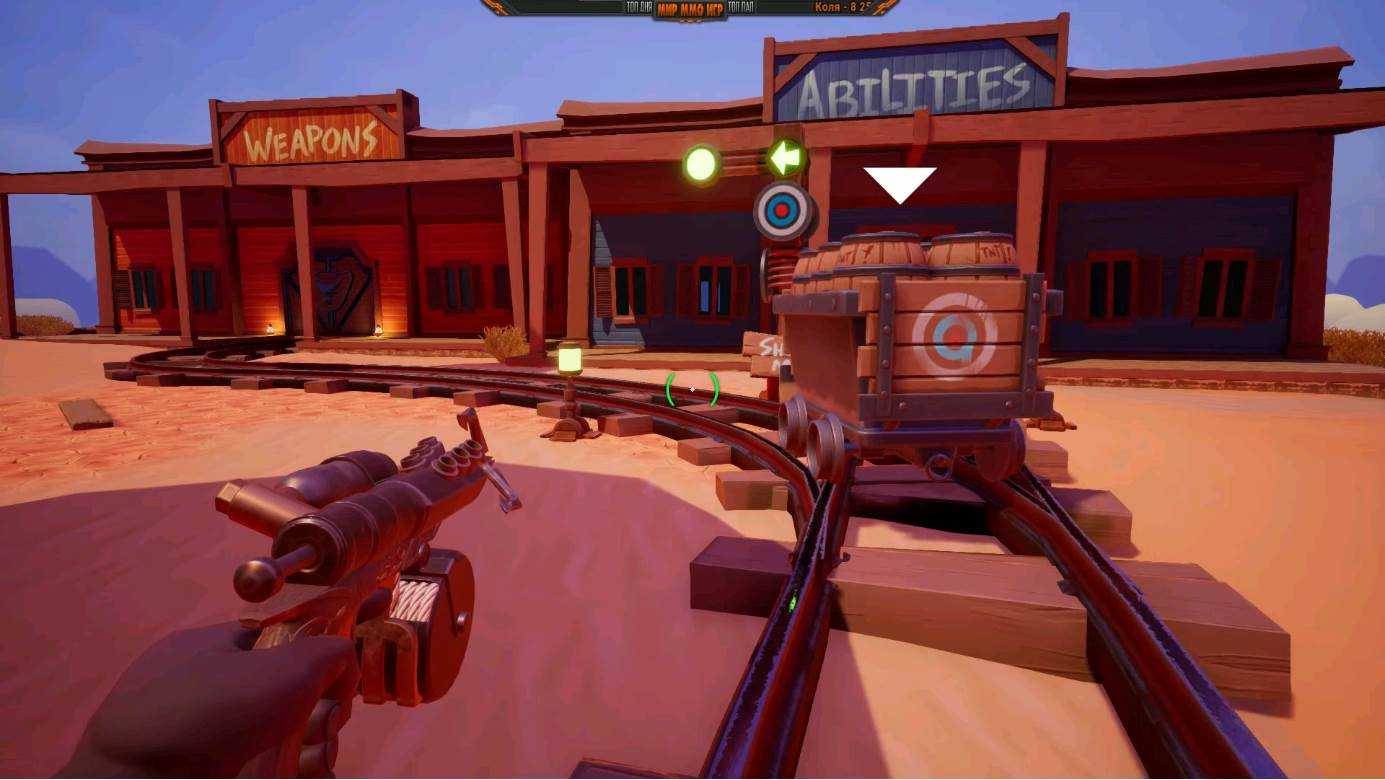 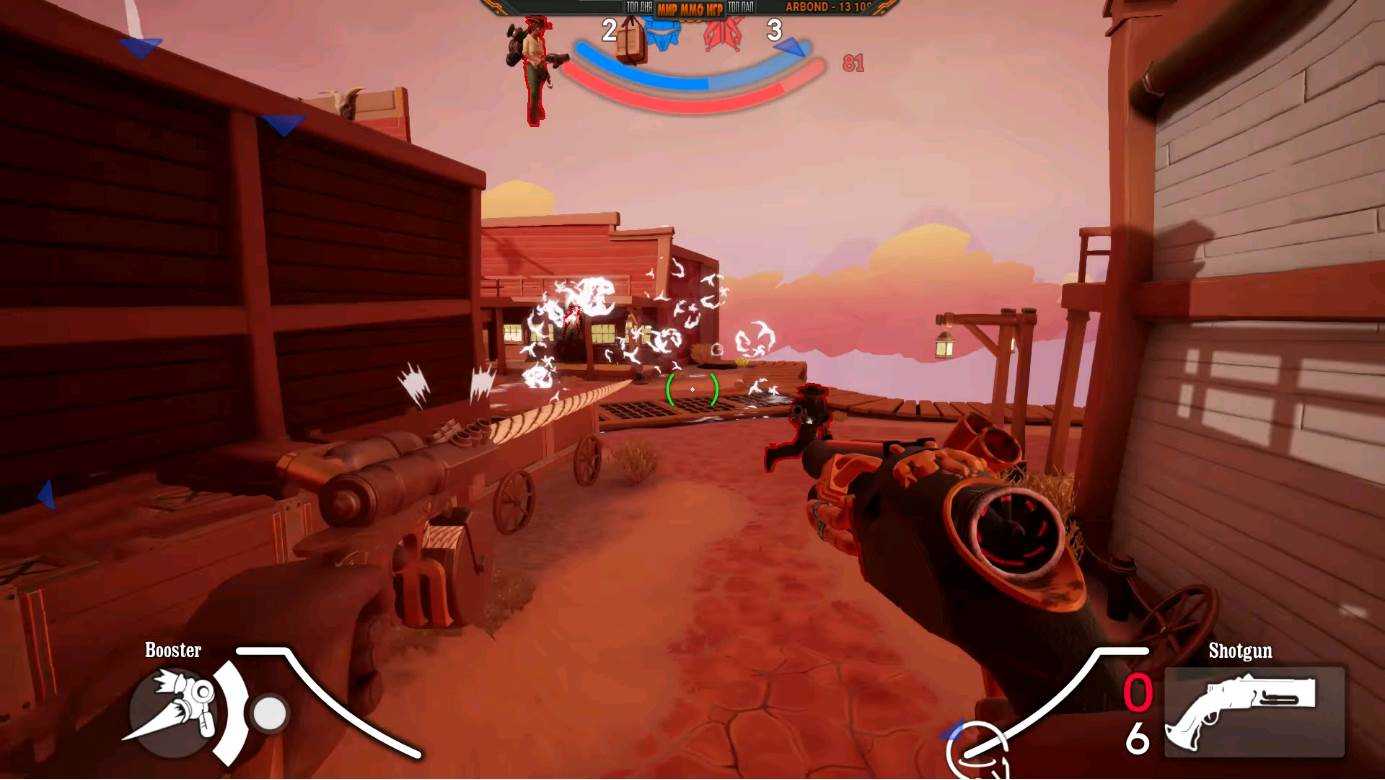 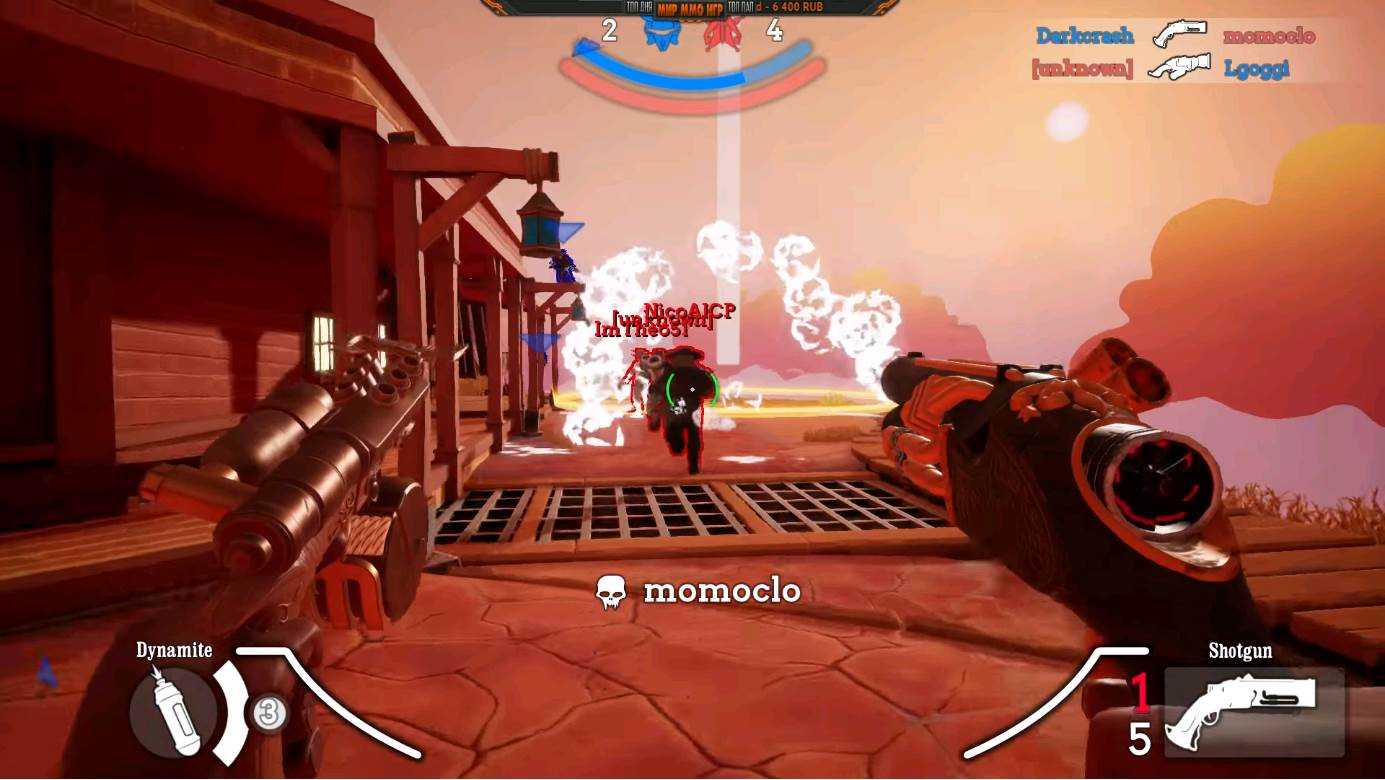 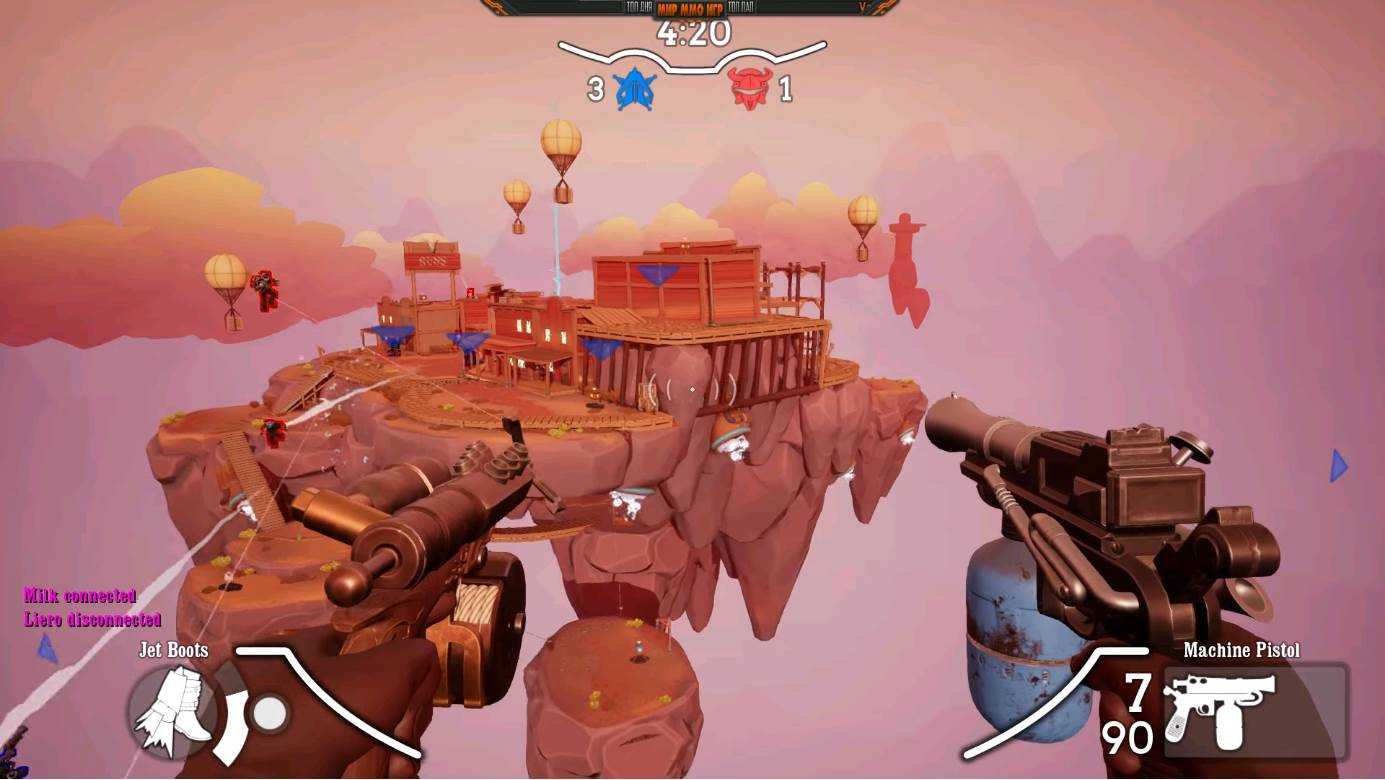 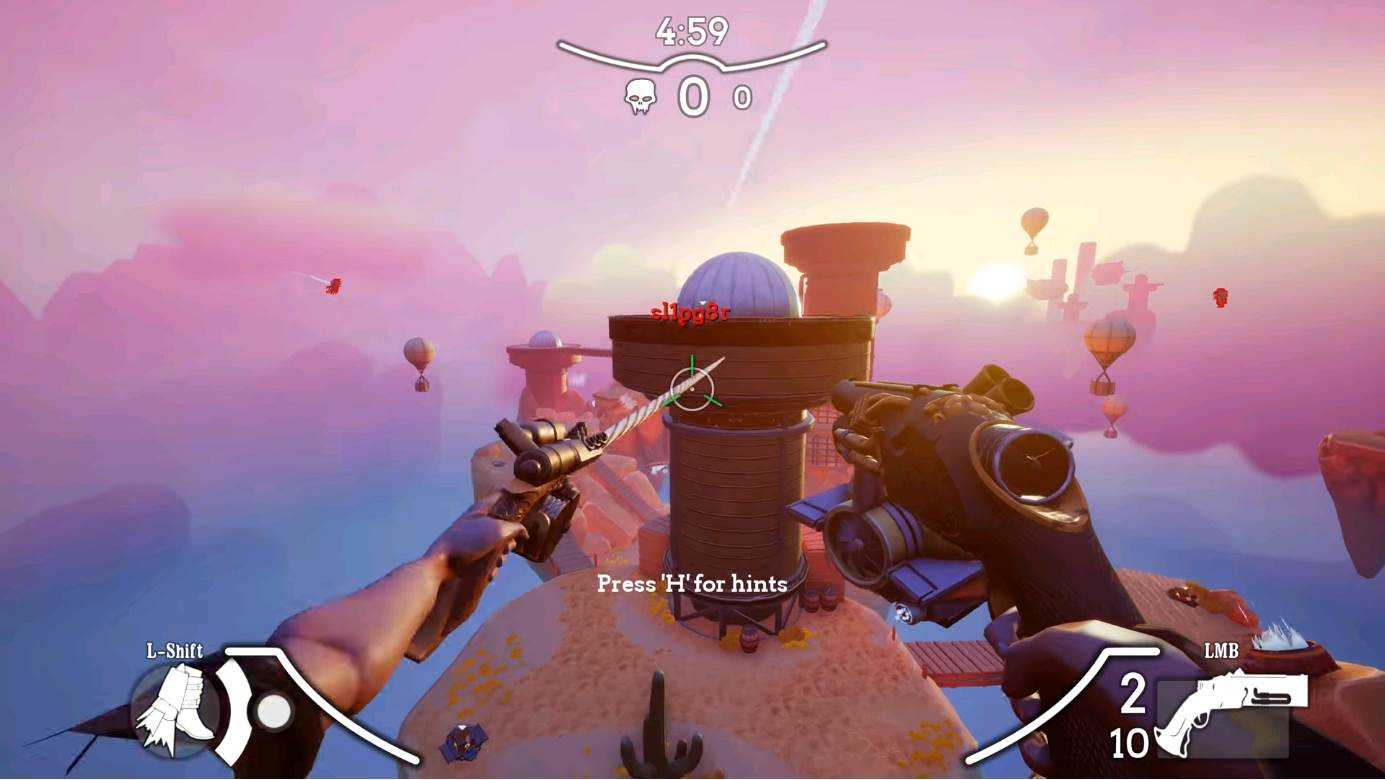 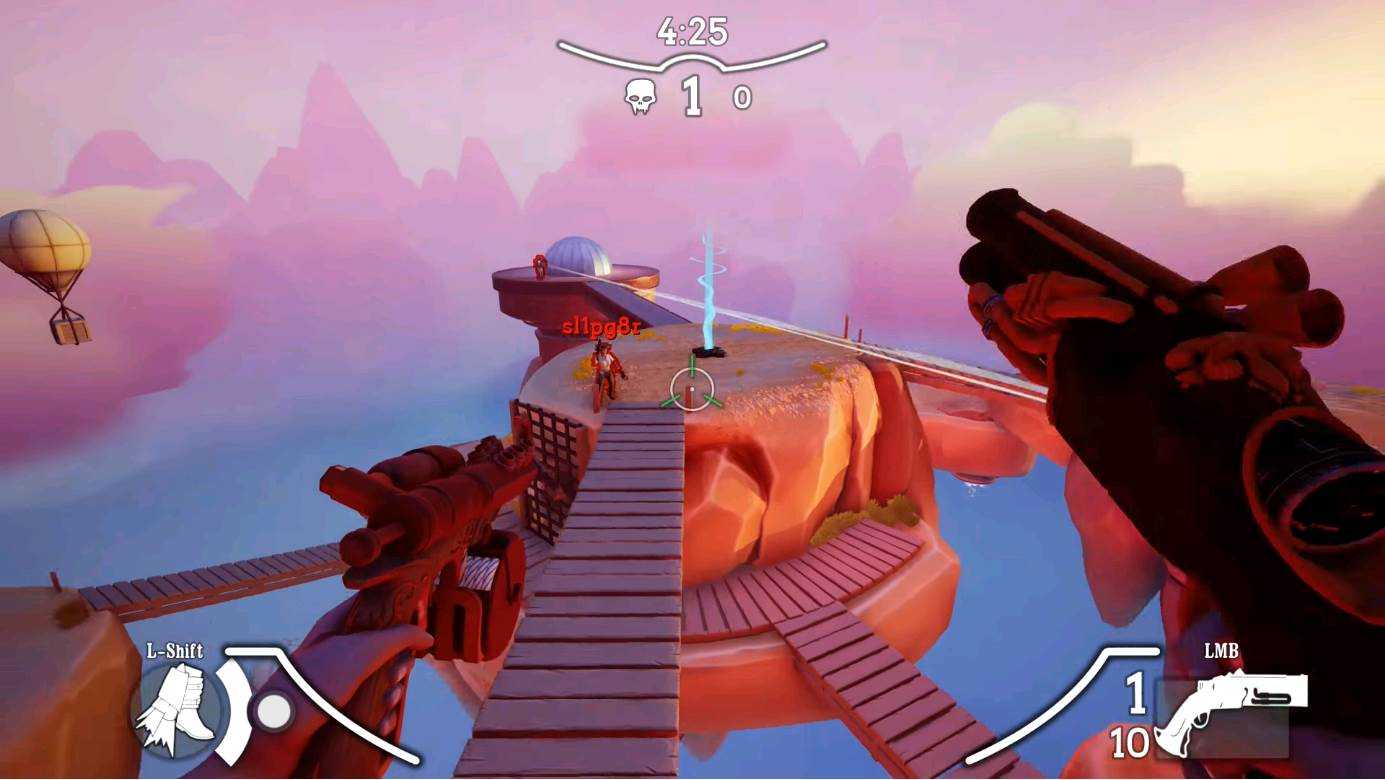 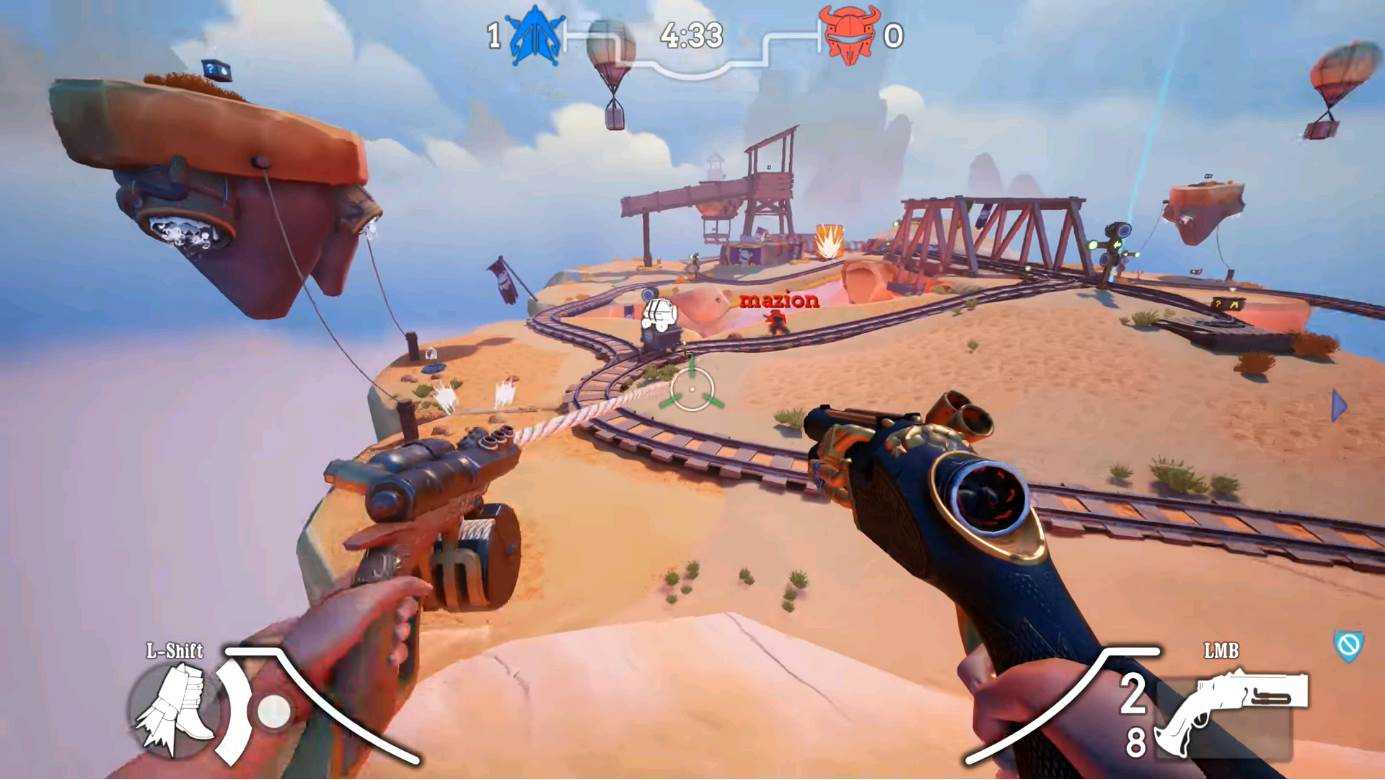 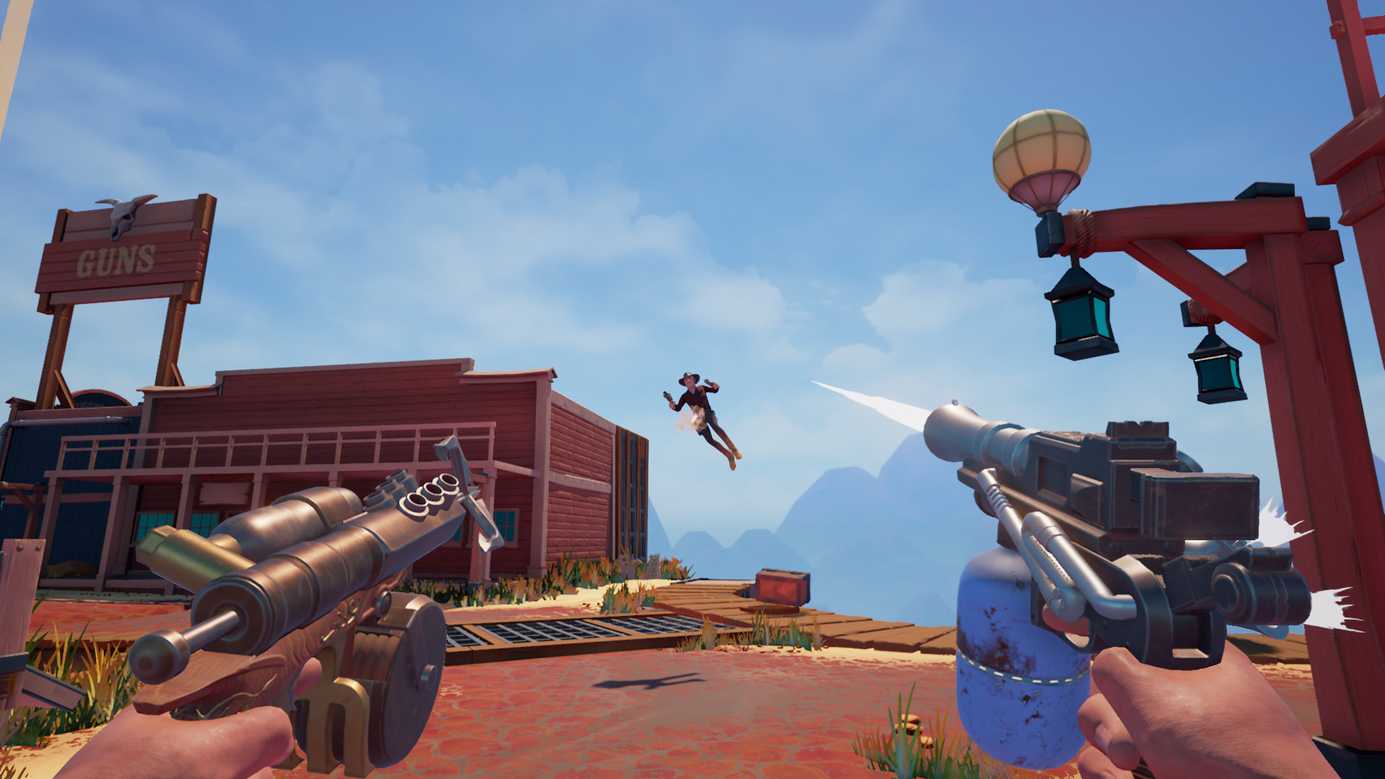 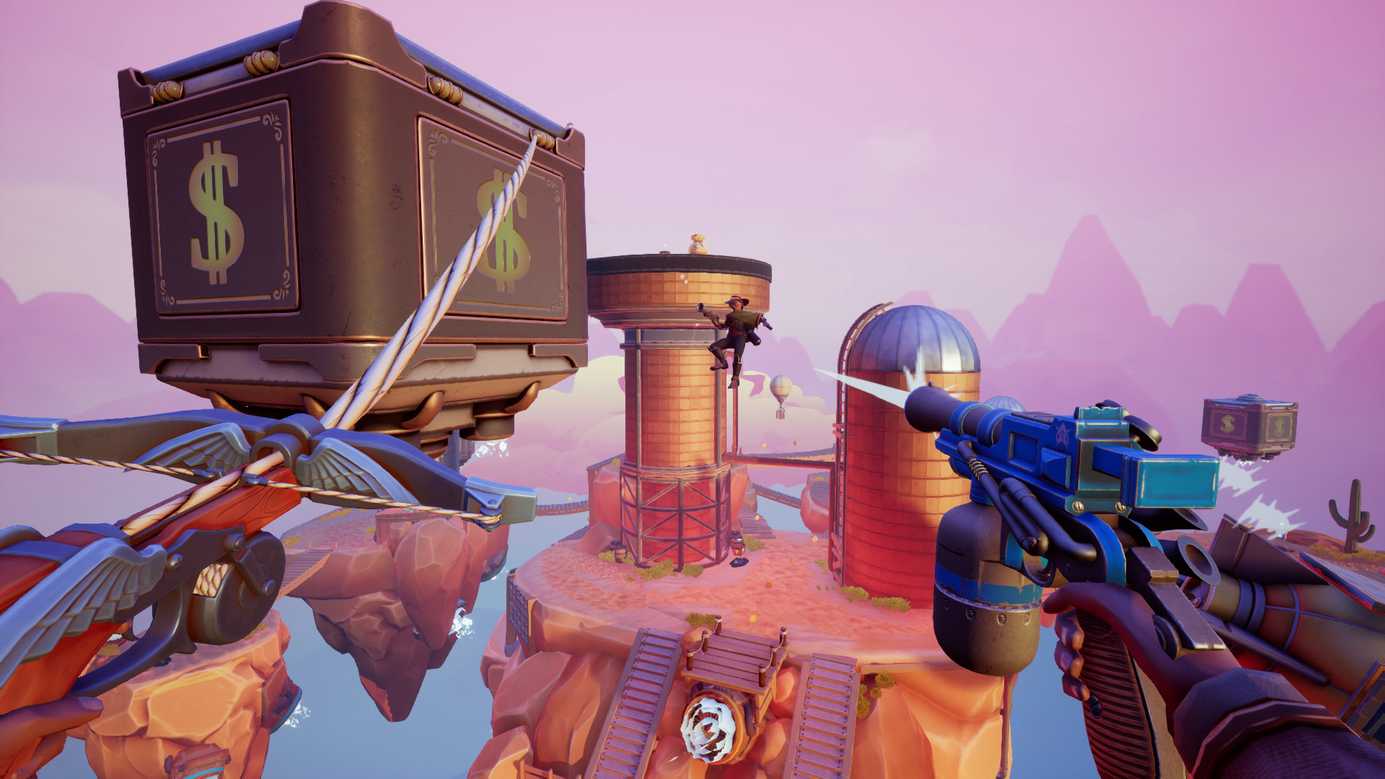 Sky Noon review and gameplay of the game

Sky Noon is an arcade shooter in the Wild West setting, offering users to take a hat, a lasso and a grappling hook to go to a showdown. The project was developed by the indie studio Lunar Rooster, the publisher was Reverb Triple XP. The gameplay here takes place in the sky, on flying islands. There are platforms for jumping, jetpacks, teleports and trolleys scattered everywhere for fast movement and knocking down inattentive users, as well as storms where you need to drop opponents, which is the main goal of the game. Yes, it is necessary to drop, kill no one with firearms, instead, players must be pushed with the help of compressed air contained in pistols, shotguns, and so on. As for the movement between the islands, it is carried out by means of a grappling hook, which is issued to each cowboy. The Sky Noon arena can accommodate up to 8 users. You will have to participate in various modes, like the classic Deathmatch, Team Deathmatch, King of the Mountain. There is also a customization of heroes and an original soundtrack. In general, the gameplay looks interesting and funny, which can not but please, since such projects have not been received in the shooter arena for a long time. The game will be released at the end of 2018.